New to the forum or to the game? Or a longtimer? Either way, tell us about yourself here!
Post Reply
17 posts • Page 1 of 1

I started in 2002 when 1.04 first came out. I used to love fighting games, so I was naturally drawn to saber duels.

Around that time, I ran into a great Swedish dueler named Lizzano who would 10-0 every duel game, becoming one of my inspirations. To this day, it still seems strange to me that even the oldest euro duelers still do not recall who he is, but I'm fairly certain that his style, much like the more well-known Swede player Papewaio, served as the progenitor to the modern dueling style.

For some reason I joined a german clan called =-RaK-=. They were a bunch of nice guys..but being german, they spoke almost that exclusively, so I never felt like I fit in, especially with my 400 ping.

Lizzano eventually introduced me to the Darkside duels servers which tracked win/loss stats of any given player. They were almost exclusively North American (NA) servers, and this as also my introduction to the NA community. I remember that 'stat-whores' would hide their names as Padawan in order to protect their own stats when stronger players joined the servers. Some of the best players I remember from Darkside was Windforce, who much like Lizzano, wiped servers out consistently but yet a forgotten name in the community today. I also met Acrobat, one of my oldest friends that I know in jk2. Other good/decent players I remember from NA Darkside: jet chan, genesis, typhon. From the euro Darkside servers, I've only heard of, but never played PaNick, who according to many euros was one of the best at the time.

During this period there was concurrently another set of stat tracking servers called BWN servers. They featured well remembered NA clans such as sdf, skx, fots, <<aim>>, wov, master, sin, and a whole bunch of others.. with sdf being perhaps the well known. In my opinion, many of the so-called 'best players in the world' from these clans were completely overrated (eg: viper, xexx, vega, protoman, spathi).

Also worth mentioning is there was a well known tournament during this time that I remember Acrobat won matches against almost all the best players of the time before falling to sdf Omniscient in a closely contested game.

Many of the older NA duel clans dissipated during this time period, but some new ones were formed, such as LM and JSA. Of the former sdf players, the one who really developed was YoungBlood (YB), who quickly took the duel community by storm. For a couple of years, he was untouchable (although his exceptional 25-35 ping probably contributed a bit, and for those who are wondering, yes there is a WORLD of difference between even 35 ping and 50 ping). He was without a doubt, one of the top 5 NA duelers of all time. ICE, flashflood, and Tragedy were also some great duelers that I remember. Another great dueler, president zer0 came to prominence during this time in the euro community. His style, much like Lizzano's probably influenced a great number of modern european duelers. There were several other duelers around this time too with whom I thought was even better than zer0, such as pax mop, pax simi, and president slayer.


2005 and onwards: To be continued....if and when I feel like writing this much crap again

I played a lot with Lizzy over the years. He was one of the reasons why I learned to use all styles (some better than others), or you couldn't beat him

I miss the old scum, is he still around JK2?

He was also the one who introduced me to DarkSide - Bird is the word! I played as MurderDeathKill on that server. I was nr. 7 at the ratinglist back then, when I played the most on that server. Unfortunately I live in Denmark and my ping sucked at Dark Side, so it was hard to keep a high rating.

Lizzy played a lot with me and my clan mates at TNA Fight club. You most have been to that server if you played duels back in the days. PaNick, Chaos and Tankith was in TNA for a short while, those where some pretty good duellers in my opinion.

There was a dueller called Razul, I don´t remember his clan, but he was also pretty good.

Anyways nice to hear from someone who remember the older duellers

Good thing internet connections has improved since then

Thats one of the reasons I came back to jk2

It's me, darthman
i'm sure you remember <3
Top

You can't just disguise yourself as Darth. I get confused!

Are you still in the game?
Top

How dare you, darthy?!
Top

Skanachrist - is that you kathy anus?? i always thought you posed with the name skatedude for fun! the sdf skatedude i was talking about were from old demos where he just did a bunch of aerial red delays and people said he was 'godly' because of that. To be honest you (kyle) had a much much better playing style with heavier emphasis on yellow and mixed with some occasional red style. You know I would NEVER call the kath i know overrated <3

Tyler - i haven't played in years, the last time i checked, it seemed like all the ffa servers were with force settings..i couldn't find a NF duel or tffa server
Top

I'm well aware of my demos XD the yellow emphasis was adaption to the newer duelers. I'm surprised Protoman isn't on your list though, he was overrated. VIPER wasn't overrated in my opinion though.
Top

Kyle it really is you, long time! I take back my comment on skate and made an edit as you're a great player based on our countless matches back in the day. It wouldn't be fair to judge the skate from sdf based on an old demo since I've only known u afterwards as kyle.
How have u been? Still playing jk2?
Top

OMG, DARTHSOUP<3 i can't believe i am just noticing this post now

been missing ya since 2014...come duel me soon! thank you for teaching me, you're the best<3
Jj.miso
Top

YES! we had a JJ reunion today

we'd love to have you come back <3 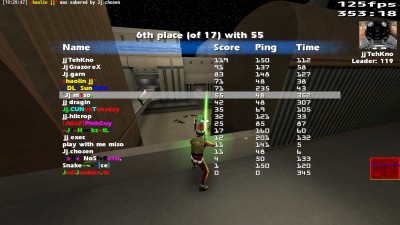 They’re both still around

I talk to jamb more than I do Impy...he’s easier to get in contact with. I linked him this post and he seemed pleased ^^
Jj.miso
Top

it is my duty to pleasure jamb <3
Top

I played in the duel scene in EU public servers and NA private servers during those days.

In Europe, a Finnish gaming website called PeliPortti (which no longer exists) had three 8-man duel servers. Those servers had "regular" duel server rules meaning no force powers, no kicking etc. A lot of Scandinavian players, including PAnick and Lizzano that were mentioned above, played on these servers. The absolutely best player as I recall was a Finnish player called Curry from clan Madskill. Many top duelers like Lizzano, Xenom and Feader were part of this clan too. Other active players that instantly come to mind were hot_metal, zeimi, demiurgi, Juikol, apinamies, Glouw, Kake2000. I wish I could remember more because it was a big and active scene.

Clanbase.com (a site that hosted ladders and tournaments) had an active JK2 1v1 ladder. If I remember correct PAnick was the first dominant champion and then replaced by Curry with both players pretty much trashing everyone they dueled.
Top
Post Reply
17 posts • Page 1 of 1

Return to “Introduce yourself”