Announce or find tournaments to participate in here!
Post Reply
3 posts • Page 1 of 1

Clan Arena Draft #2 had a great turnout (well over 20 players), we seem to be on a rise. No reason to stop now, everyone should feel invited to next Clan Arena Draft #3 on Sunday the 2nd 7PM CEST. I have some new ideas how to better handle the organisation aspect, also players are already more familiar with the format. 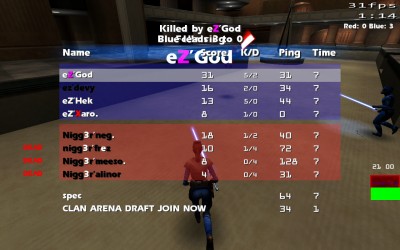 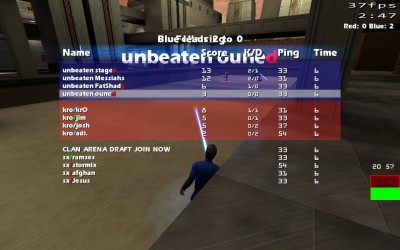 Previous tournament was played with five 4-player teams, however one of them completely dismantled after few games.
Standings: Unbeaten took their name literally and won all their matches. All of remaining teams had 2-2 record, their direct results and total round wins determined the standings. See detailed bracket on challonge: http://challonge.com/cadraft2

Here is a demo pack in case you missed it: https://ufile.io/hpg7b

This week Devy is a surprising leader in score, kills, average score per round and team damage. Also it's worth to mention that he was picked first. Biggest damage dealer title goes to his teammate, God. Less experienced players are not in the table but did a good job at supporting their team. I only wish some of them were more thick-skinned, stayed in game and the results will surely come. My personal congratulations go to ouned who was put in a hard spot and had to save his team in a breathtaking 1v1 matchpoint situation against sx ^^

Again I heard few complaints about "bad organisation" at the begining of a match. I organised many ad-hoc tournaments in the past and believe me, it won't get much better (until players get used to the format and know what to do from the get go). Have some patience, withstand first 15 minutes it takes to pick teams. After this games go smoothly and we are done at 21:30. If you have any suggestions how to improve the team-picking part then please let me know. I have few ideas myself already.

Again some players dropped out and others came in during the tournament. Please try to reserve your time beforehand. If you can't be there at 7, we may find a spot for you later on.

I'm not gonna comment on a team-fixing scandal because it turned out to be such a fiasco in the end :D However I'm gonna reconsider my captain choices next time.
Top

Clan Arena Draft #3 is over.

We had slightly less players than before, therefore played in 4x3 format (4 teams 3 players each). On the upside few oldschool top players showed up: hav0c and Pingu. Hope we will see them more in the future. Here are results:
Challonge bracket: http://challonge.com/cadraft3
I think the teams didn't turn out as even as before, you can blame me for that :P Team Josh took the victory with a clean 3:0 sweep.

Toad (dentoN) took the lead by having highest score and dealing most damage. However stage6 played only 22 rounds against dentoN's 29 and had amazing 238,5 dmg per round. What is more impressive? It's up to you to decide :-) Also worth of note is hav0c's 0 team damage during the whole event. Certainly a player I would like to have on my team!

As some of you may have heard I'm leaving for few weeks so this tournament ends the series. Moreover it seems the general interest (outside of hardcore tffa community) fell a bit this week so maybe it's a good time to have a break. For me it was a fun event to play and organise. I implemented Clan Arena gametype in SaberMod exactly for this scenario – making matches between mixed teams more competitive and I believe it proved it's better suited for this than traditional TFFA. Of course TFFA isn't going anywhere but if you get bored of pub 4v4 games remember, you can always Callvote -> mode -> NF Clan Arena on SaberMod Servers.

I also experimented a bit with imprting endgame stats to a database, this is something that can be done for future events hosted on SaberMod rather effortlessly. Below are combined stats from all 3 events:

My personal awards go to: What's Next?

As I wrote earlier, I'm leaving for few weeks and don't plan on continuing from there. I hope someone can step up and tunnel this new activity into something positive – eg more tournaments or clan wars. SaberMod 2.0 serverside that was used in Clan Arena drafts can be downloaded from there: viewtopic.php?f=38&t=728 recommend it for 1.04 events and offer technical support. Its main goal is to promote competitive aspect of the game.
Top
Post Reply
3 posts • Page 1 of 1